Getting Stuffed In Turkey - A Travel Journal 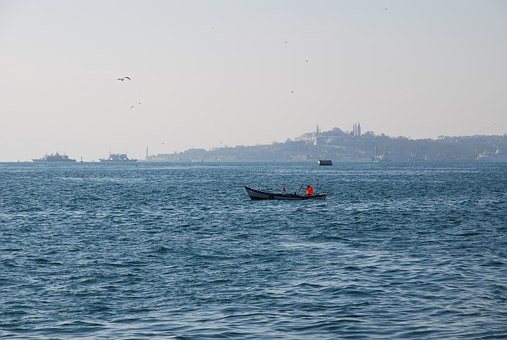 Days prior to departure, I as engulfed in fear this trip wouldn't go

. The volcanic ash cloud parked over Europe was heading straight for Istanbul. April 22, I was never so happy to board an airplane along with 44 wonderful adventurers of our group tour in tow. Turkish Airlines revamped it's entire fleet now vying to rank #3 of all European carriers. Economy class provided the new sliding seats to maximize legroom, amenities kits, seatback blockbuster on-demand movies and the freshest airline meals I've ever had.

Istanbul, located in both Asia and Europe is the only city that straddles two continents with a thrilling cultural mosaic blending the old with the new. Our guide Gigi was assigned to fly with us 24/7 throughout the entire tour of this magnificent country. From day one, she was so outstanding I doubled her anticipated tip. On a city tour, we covered all major sites with the frenetic energy of whirling dervishes. It included the Blue Mosque, Haggia Sophia, Hippodrome and Topaki Palace, home to sultans, harems and eunuchs I stood in awe there at the 87 carat Spoonmaker's Diamond that was found discarded in trash and traded for 3 spoons. Later we got lost in the labyrinth of the 4300 shops of the Grand Bazaar. The chronic pleas from vendors can assault one's senses if you don't know how to bounce it off. I pretended to be a deaf mute strolling zen-like with a smile, My greatest treasure was a butter leather "Prada" or should I say "Prado" bag for $30. At night, many experienced their first authentic Turkish Bath at a 300 year old hamman which can be totally confusing if you don't know the procedure and no one speaks English. First you get naked in a steam room and are pounded like a piece of meat on a warm marble slab. Then they loofa off several epidermal layers followed by tons of soapy suds and an oil massage. It ends with torrents of water. I felt I was being water-boarded and wanted to "spill my secrets" but left squeaky clean as I ever felt in my life. The younger group participants partied late into the night Istanbul never sleeps.

We flew to Cappadocia which was like a Salvador Dali painting from the lunar landscapes formed by volcanic rock and weathered over a millennia. The tuff layers eroded to form bizarre rock formations of dramatic gorges and breathtaking fairy chimneys. It is all surrounded by meringue-like hills that look like Mars. The entire region is a geologists dream and most worthy of a UNESCO World Heritage Site. Ancient civilizations here created huge underground cities. Today they still carve out troglodyte styled houses, restaurants and hotels. Most establishments begin with the name "Flintstones". We checked into a 4 star cave hotel. Terry and I were upgraded to a suite, dark and cavernous with flatscreen TV and jacuzzi tub. It was completely surreal I hung some clothes on the wall and the soft porous rock crumbled. I could have carved a new room off my cave-suite.

The next day we explored the Goreme Valley. In the 2nd century, early Christians fled Jerusalem from Roman persecution. Tens of thousands lived underground in elaborate cities with subterranean houses and churches. 360 in total. We toured Kaymaki which spirals downward for 8 stories! This place harbored 4000 beleaguered Christians. It was fascinating to crouch through a maze of monasteries, stables, wineries, kitchens and chapels. The highlight however for me on this trip was our visit to Fatma's "house." Gigi phoned her to ask if she could bring "a few Americans" to visit her cave home. As our bus pulled up the dirt road, Fatma came running to greet us with open arms. She inherited this cave from past generations and lived here 43 years. We crawled into her living room which was layered with 4 fine Turkish carpets she spent decades weaving. There was solar electricity and plumbing. She served us all honey cake and tea. Outside were 2 pet cows and organic garden. This is the life I aspire to. I should have out this on YouTube. Turkish hospitality is world famous. In this rural central region, it is overwhelming where one is offered apple tea just for entering a grocery store. Turks call visitors "tanri misafiri" or God's gift.

Cappadocia has won global Balloon Championships. Most of our group launched at dawn for a hot air balloon ride over spectacular topography. In brilliant sunshine, they floated silently over sleepy villages and canyons pocketed with endless caves. Later in Avanos, we bought exquisite pottery with designs dating back to the Hittites. We also visited a carpet factory to view the weavers working and silk worm cocooning. I was surprised when 12 members purchased elegant carpets to ship home. On my travel budget, I couldn't afford a mouse pad carpet. That evening we attended an authentic and mystical performance of the Whirling Dervishes. Six dervishes danced themselves into a trance for us. They are of the Sufi sect, the most tolerant arm of Islam dating back to the 13th century. Back i my cave room, I practiced the meditative dance and collapsed in dizziness after 3 minutes. There are few places on earth where I want to linger, Cappadocia is one. I hope this awesome hidden gem doesn't become exploited by global tourism. I hope to visit Fatma again!

We headed out on a long drive to Pamukkale. Enroute we stopped in Konya, the spiritual center of Turkey, to visit the Dervish Museum. This is the land of pomegranates, apricots, cherries, honey, walnuts and roses. There are also fields of unique purple poppies cultivated to produce not heroin, but morphine for medical export.

We checked into Lycus River Thermal Hotel where we marinated our bodies in the indoor and outdoor thermal pools. Pamukkale with hundreds of hot springs was an ancient spa where even Cleopatra came for treatments. We climbed the snow-like white travertine terraces of mineral pools. The "Cotton Castle" is a geological wonder. We also toured the amazing ruins of the holy and healing city of Hierapolis.

Our last days were spent on Antalya on Turkey's "Turquoise Coast." The Sheraton Resort sat cliffside with beautiful views of the blue water and a backdrop of the dramatic Toros Mountains. The sand and sea crescent bay reminded me of Rio. We did a private boat cruise on the Mediterranean Sea to view Duden Falls. It wasn't Niagara, but the balmy ride was glorious. I shopped the bazaar of Old Town while the group toured Perge founded by the Romans 3000 years ago. Apostle Paul preached here in 48AD. They continued to the impressive ruins Aspendos. This ancient port city has an intact theater that held 15,000 people. As for cuisine on this trip, everyday was a feast with most meals included. I gained a few lbs. on olives, flatbreads, kabobs and Turkish Delight.

There are usually hiccups with international travel, but this trip was flawless and the group blended so well. I hope Turkey never joins the EU or changes it's currency to the Euro. It's one of the few places left in the world where one can get an affordable luxury vacation. This Adventures For Singles trip was $1175 land with abundance you'd never find in Europe. As a tour operator, I get tons of materials. Many destinations hyped as exciting turn out to be dull as paint by number. Turkey was truly stimulating with unlimited memories. I tend not to repeat to many destinations, but I vow to present this trip again.