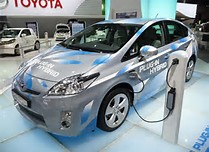 , which is set to arrive at NJ BMW dealerships next month. Adding to their luxury hybrid lineup is the 2010 ActiveHybrid 7 sedan.

This new hybrid will give New Jersey BMW 7 Series shoppers (with the environment in mind) a great sedan option, though it is not quite at the same level as the X6 in the eco-friendly world. The ActiveHybrid 7 sedan is actually a mild hybrid which means it cannot travel on electric power alone, which is a standard capability of a full hybrid. In the sedan, its electric motor restarts the engine after it shuts off at stops and also adds torque to assist the gasoline engine.

Set to go on sale in NJ BMW dealerships early next year, the ActiveHybrid 7 sedan comes built with regenerative brakes and BMWs two-mode Hybrid system, including a lithium-ion battery pack and electric motor. Typically the engine shuts off at stops, but this can be disabled by switching the transmission into the Sport mode. The N63 4.4-litre, direct-injected and twin-turbocharged gasoline V8 engine is set to produce 40 more horses than the normal 750i/Lis 400 hp. The ActiveHybrid 7 is said to have a combined output of 516 lb/ft of torque.

While it may only be a mild hybrid, BMW assures it will be "the fastest hybrid sedan in the world." Car and Driver testifies that "the Hybrid 7 rockets to its 150-mph governor without any of the lethargy commonly associated with hybrids." The New Jersey BMW 7 Series Hybrid Its said to reach around 62 mph in just 4.9 seconds.

To credit its hybrid name, the ActiveHybrid 7 sedan beats out its standard 750Lis urban test for CO2 emissions by an impressive 30%, which comes out to an improvement of about one gallon of fuel per 120 miles driven.

No price tag has been assigned to BMWs new addition, but its expected it may cost more than the 750i, which starts around $80,000. This may seem like a hefty price tag for a hybrid but car buyers need to remember youre not only saving on gas and helping out the environment, youre still getting top-of-the line performance, safety features and design that come along with the BMW tag.

Although the ActiveHybrid X6 wont debut until next month, and the ActiveHybrid 7 Sedan wont be ready to hit the market until next season, project manager for the 2010 BMW ActiveHybrid X6- Peter Tnnermann- reportedly admitted to Autocar that BMW plans to launch its third hybrid within the next 12 months. No hint as to which model but he explained, "Volume models like the 3-, 5- and 7-series are clearly more suited towards a mild hybrid set-up on the basis of their packaging and broad appeal."

Guess well just have to wait and see. Until then, stop in your local BMW dealership in NJ to find out more details about the 2010 ActiveHybrid X6 and 2010 ActiveHybrid 7 sedan, or test-drive any new or used BMW NJ.